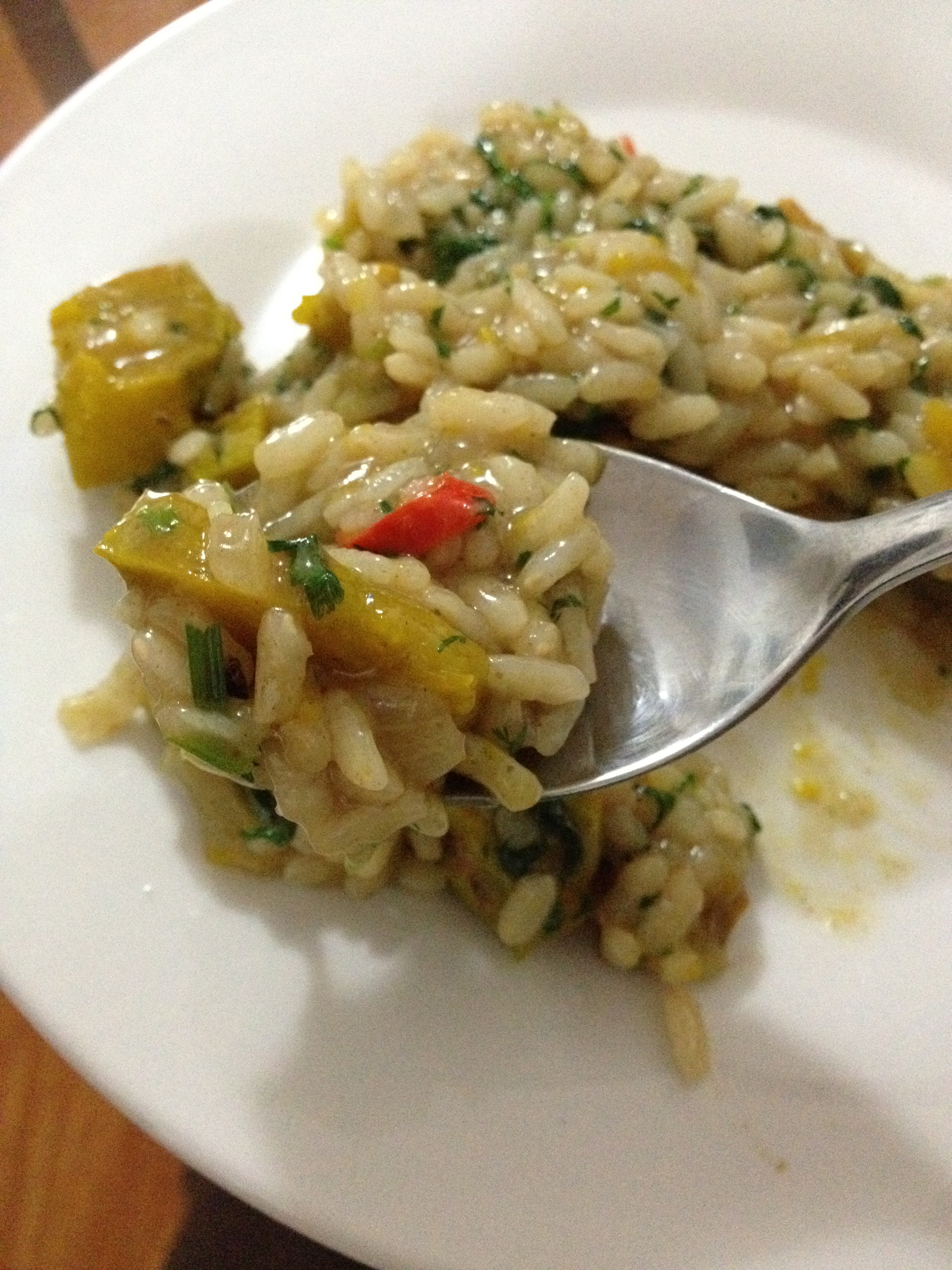 I have a confession to make.

When I first arrived, I couldn’t afford to buy arborio rice here.  So, in that first year, I didn’t make any risotto, one of my customary meals back in the UK.  Thereafter I got so desperate for the comfort of cooking and eating risotto, I managed to convince myself that it didn’t matter if I used jasmine or ginger flower rice (a Cambodian medium grain rice) instead of arborio, carnaroli or any different type of risotto rice.  I’ve merrily been making and feeding this pumpkin ‘risotto’ to many of my friends, using whatever rice I had at hand.  Believe me, there were no complaints.  Spicy, and gloriously ochre with the sweetness of fresh coriander.  Who would turn down this dish? 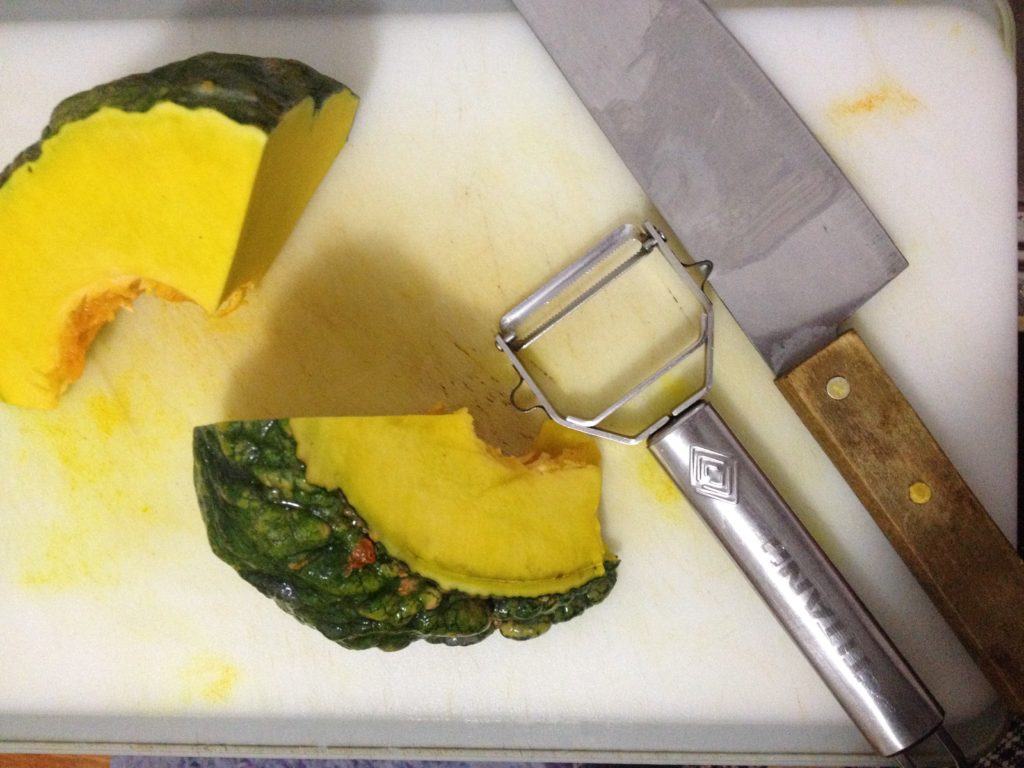 However, a few months ago it all changed.  My friend Robert gave me some of his delicious bacon, mushroom and spinach risotto (which I need to try cooking myself!) made with arborio rice.   And the realisation of the error of my ways overwhelmed me.  It just ain’t a risotto without risotto rice! How had I duped myself into thinking that this chewier, creamier textured rice could be replaceable? 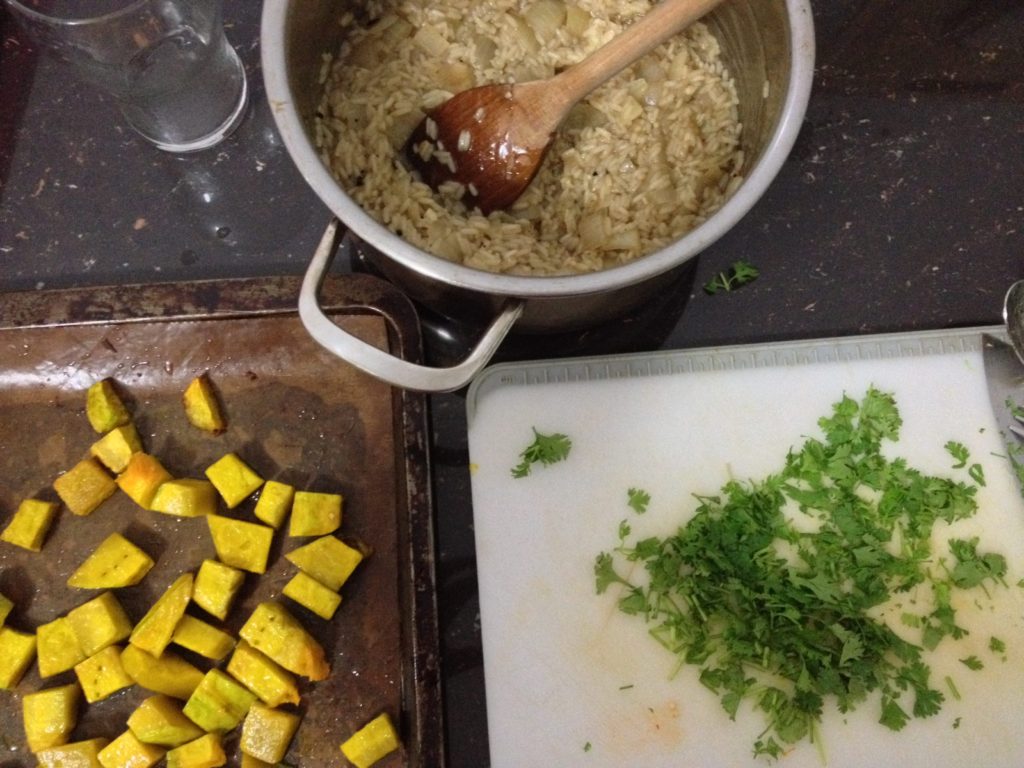 So, yes.  You can make this not-really-risotto, pumpkin risotto (what am I supposed to call it now?) with any grain of rice that you have.  But don’t call it risotto.

It’s really simple to make.  I make it a lot as pumpkins are pretty much available all year round in Cambodia, but not always strictly as a risotto.  I really appreciate the fact that here you can buy however much of the pumpkin that you’re planning on cooking with: you just ask the market seller to cut off however much you need.  In contrast, I don’t think that I would have made this in the UK because I didn’t really buy pumpkins.  I didn’t really know what to do with a whole big pumpkin and I didn’t shop in those places that sold different varieties of smaller ones.

I adapted the original recipe to add in a bit more spice, with extra cumin, chilli and coriander.  Lastly, there’s the grown-up version with the added white wine. 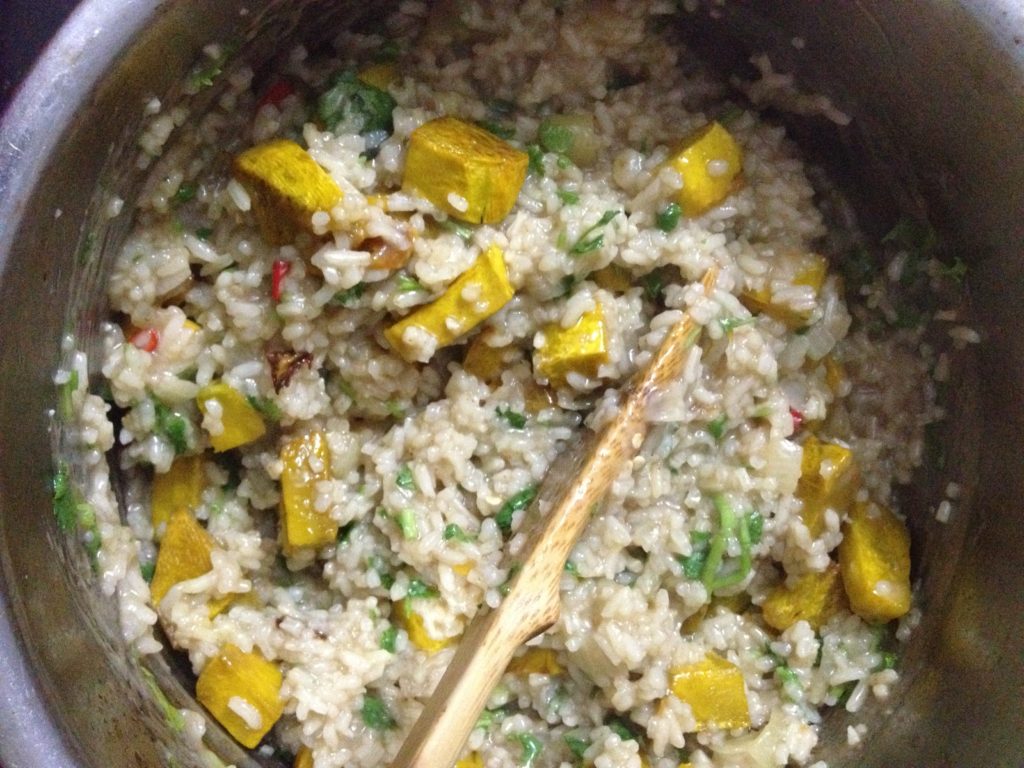 The verdict?  A satisfying meat-free meal, which my friends, khmer and western, enjoy eating.  I especially like this paired with kimchi. 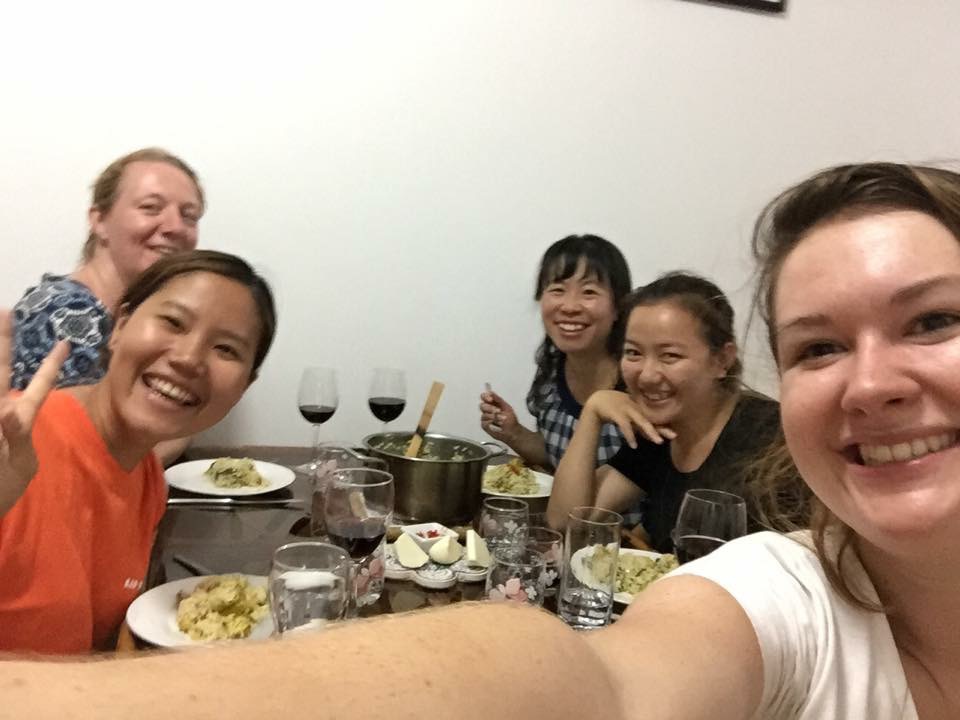 Follow-up to Cryfield 3: the start of the pudding competition from Courgettes and Limes: Recipes and Rhymes

Haha! Here’s a blast from the past: I was editing the tags on this blog entry when I hit save for later button by accident, thereby changing the publish date on this entry!

Many people ask me what it is that I do, in my residential life role. I normally end up telling them a selection of the good, the bad and the ugly. Some stories of when you know that what you’ve said or done had really helped a student, some horrid grief that a student has given you and then the vomit… It doesn’t really do the residential tutor role any justice but it gives them a flavour of it. There is rather a lot more that goes on in the general humdrum of residential life. We go around the blocks to try and get to know the students and in doing so end up answering questions on topics such as heating, fridges and personal tutors. Then there are the nights when you don’t get any sleep, for one reason and another. And of course, we run events for students. In my first year as a resident tutor, I ran a pudding competition in my block with 84 students. Pretty much all of them took part. In those early days of blissful ignorance of a disease called ‘apathy’ so commonly caught by students, I did not realise what a monumental achievement it was to have the whole block take part.

I found these photos lurking in my photo archives. I can’t claim any credit for them. One of my students took them and then passed them onto me to publish online, which I never got round to. It’s a hazy memory now, but I remember being pretty sleep-deprived by then and losing the will to write any blog entries regularly. So here are some photos of what the students got up to. Finally! And all because I accidentally hit the ‘save for later’ button. (photos courtesey of my Cryfield 3 kitchen 5 2009 students) The Cryfield Pudding Competition is on Wednesday 4th November. We’ve decided to stick to english puddings this time round and if it’s a success, then we could have an international spin on things… tiramisu, cheesecake all spring to mind.

We’re hoping that, as competitors, you have fun with each other in the block, have enough puddings to taste and discover all the hidden talents that you have.

The rules are relatively simple:

And here’s the bit that you’ve been waiting for allocations of kitchens and puddings:

The judges are Cryfield Resident Tutors and we’ll provide bowls, spoons, cream and custard. Looking forward to it!

ps. please use the comments facility, if you would like to suggest a charity that we can donate the proceeds to. If not, David and I will pick one and let you know.

Perhaps it was inevitable? … that food would be involved in my scheme for breaking down cultural cliques, sharing British culture and encouraging social integration and between UK and international students. I discussed it with Lucy, the resident tutor in Cryfield 1, last night who came up with this and the action plan. Tonight I mooted the idea of a pudding competition with several groups of residents in my block and they loved it. So folks, it is definitely ON!

The rules are relatively simple (but not yet set in stone so suggestions welcome).

Currently, I am thinking that judges will be the Cryfield Resident Tutors. I haven’t discussed it with anybody else yet.

I’ve also given them some more suggestions to think about:

Everyone who would like to take part contributes 50p and the proceeds go towards their favourite charity (as a block) and covering the costs of the food.

Or – they could choose to cover costs of food amongst their kitchens and make it a social event.

So, I need seven suggestions of british puddings. And if you’d like to be a judge then it can be considered…