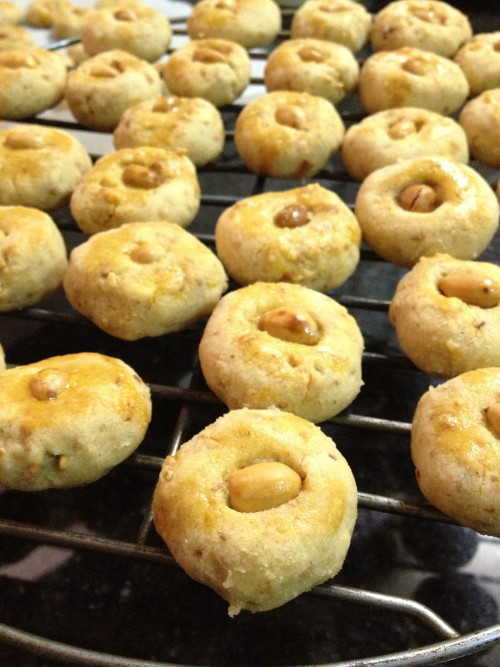 I’ve discovered that peanuts lose weight.  No kidding.  I’ve been roasting and peeling kilos of peanuts for this recipe and this is my unintended learning outcome.  Seriously, somehow in the process of them getting hot in the oven and unzipping their jackets, followed by a gentle coax to peel it off them a bit later, they are lighter than when I first had them.

I know.  When I describe it thus, it’s SO obvious.  Of course, those papery skins weigh something.  But who would have thought that peanut skins weigh so much!  300g of raw shelled peanuts = 254g skinned and roasted peanuts. 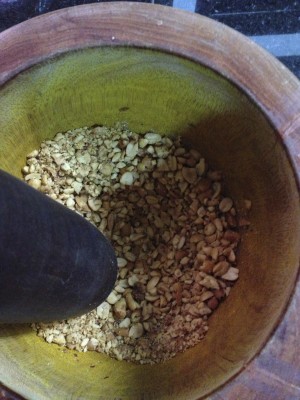 Given the plentitude of peanuts in Cambodia, and that I fell in love with these small morsels of rich, peanutty, salty, sweetness the moment I bit into my first one, I’ve been testing one chinese peanut cookie recipe after another, ever since I arrived here.  That was 5 months ago.  In fact, I’ve begun to wonder whether my friends are sick of me testing it out on them, but too polite to tell me.  ‘Try this cookie and this one.  Can you tell me if you can taste the difference between them?’  But, truth be told, every recipe I tried was either a tad too sweet or just didn’t recreate that cookie-crumbling-then-melting-in-your-mouth sensation.

So, I experimented with sugars and flours and ended up with this recipe.  I replaced the icing sugar with caster sugar to remove the rather cloying sweetness of the cookie and introduced cornflour to the mix.  (I use cornflour in my shortbread recipe to create a crumbly texture.)  Then I discovered that if you don’t eat the cookies for at least 2 days, the cookies soften and thus melt in your mouth regardless of whether you added cornflour to it.  Unfortunately, they don’t tend to hang around long enough for that to happen. 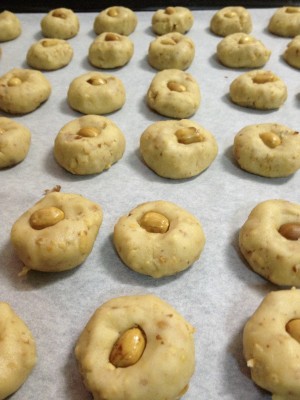 They’re coming with me to my friend Amy’s last-of-the-15-days-of-Chinese-New-Year party on Friday.  At first, I thought that this was a solely Chinese celebration, until I asked my mum. Nope, apparently in Korea they also have a special meal to mark the 15th day, the day of the full moon.

In Amy’s invite she asked: 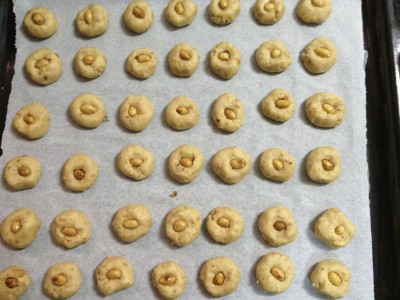 2. Roast and skin the peanuts.  If you already have roasted peanuts, rinse off any salt on them and dry them.

3. Grind the peanuts into a fine-ish powder in a food processor*.  They’ll clump together towards the end as the oil is released.  Don’t worry about it.  When you’re done just break up the clumps with your fingers and when you add in the sugar.  *Initially, I didn’t have a food processor (now I use my Bamix) so I pounded them into a powder with a pestle and mortar.

4. In a separate measure out the cornflour, flour and salt.  Sieve it before adding it to the peanut and sugar mix to ensure a lighter texture.

5. Pour in the oil and mix together with your hands until it comes together away from the edges of the bowl.

6. Take a tablespoonful of the mixture, roll it into a ball and flatten it lightly on the baking tray.  If it helps, each ball weighed between 15-20g when I weighed mine out.  Carefully position a peanut half on the top of the peanut balls and brush the tops generously with beaten egg.  The beaten egg gives them a beautiful shine and colour.

8. Allow them to cool for 2 minutes on the baking tray and then transfer them to a cooling rack to cool completely.

It is seriously tempting to eat these while they are still hot, so watch that you don’t burn your mouth when you do.  Enjoy and Happy Chinese/Korean New Year!

I am, in fact, quite excited that it’s snowing outside. It has given me that wee impetus to press publish on this recipe, which has been lurking around in my drafts folder for a while. On an aside: say aloud with me, ‘lurking around for awhile’. Doesn’t it conjure up that horrible childhood fear of a shadowy bogeyman patiently waiting to catch you in the middle of a long, dark corridor? Mind you, saying the whole of that first sentence out loud now brings up a ridiculous image of a recipe like a white vapour, snaking out of a metal filing cabinet. It’s not quite the way that I’d planned to introduce this recipe to you. So, back to the recurring theme of this post. Essentially, it’s about ideas remaining dormant and not being actualised because of whatever reason.

You see, I’d been wanting to bake these peanut and rosemary cookies ever since one of my colleagues passed me a newspaper clipping with this recipe on it. That was about 18 months ago. The timing of this recipe landing on my desk was perfect because I had just been thinking about combining rosemary or thyme with a sweet dessert for a wee while. But I just didn’t get round to it, or I forgot. Maybe some student emergency came up before I fully committed to baking the recipe, or something! You get the idea. The recipe continued to lurk in between the covers of other recipe books.

When summer came around, my tastebuds changed and my mind started exploring the idea of combining lemons and black pepper. So, one afternoon I invented a lemon, fig, nut and black pepper cookie recipe, which Val promptly decided were her favourite cookies.

When the nights started drawing in and the temperatures dropped, my tastebuds hankered after a more pungent flavour. I pulled out this recipe, sent myself off to go to the shops to buy some salted peanuts and snipped off some fresh rosemary. It’s as simple as that really. I think, that most of you, will have the other ingredients as standard store cupboard items already. The other joy of this recipe, I discovered, is that you can pretty much make this in one bowl, mix it within 5 minutes and be biting into your first batch within 20 minutes of starting out on the recipe. I don’t know many other cookie recipes out there that can beat that! And boy, did I enjoy eating them. These are fast becoming my favourite cookies: I baked them twice within 5 days. Elegant, fragrant, crunchy and very more-ish. If you want an alternative sweet grown up sweet this season, or you’d like to do something different with your leftover bag of salted peanuts which you offer to your guests, then I’d recommend this recipe to you. I know that rosemary and salted peanuts cookies sound odd but I have to congratulate Dan Lepard on this fine flavour combination. 1. Preheat the oven to 180°C/350°F/Gas Mark 4 and line two baking trays with baking or greaseproof paper. I tried out the pizza stone for one batch but found that the baking trays did a better job than the stone.

2. Mix the oil, sugar, honey, rosemary and cinnamon in a bowl until it is like a paste. I use a metal spoon for this, 3. Add in the peanuts and egg and mix well.

4. Finally stir in the flour and bicarb of soda. Naturally you start mixing this in with the metal spoon, but soon, it becomes clear that it’ll be much easier to get hands-on stuck in with your hands and finish mixing in the flour. 5. Press together 30g balls of dough. That’s ping pong sized balls, for those of you who don’t really want to measure out them out. Lay them out on the baking tray, spaced 5-6cm apart because they spread a lot. Last time I made them, the peanuts rebelled a bit and didn’t want to stay on the cookie dough. Tell them who’s boss and push them on.

6. Bake them in the oven for 12-14 minutes, depending on how chewy you like them. I aim to take them out when they’re a golden colour, rather than bronzed all over. The bronzed ones are fine warmed up, but otherwise they get a bit hard when they cool. Lift the baking paper with the cookies, off the baking tray and let them cool on a wire rack for a minute, then carefully peel them off to the wire rack.

They make 24 cookies, so I bake these in batches.

If you find them a bit too salty, Dan suggests that washing the salt off the peanuts first. Personally, I like salty sweetness. To top it off, I’ve got a kitchen fragrant of rosemary.