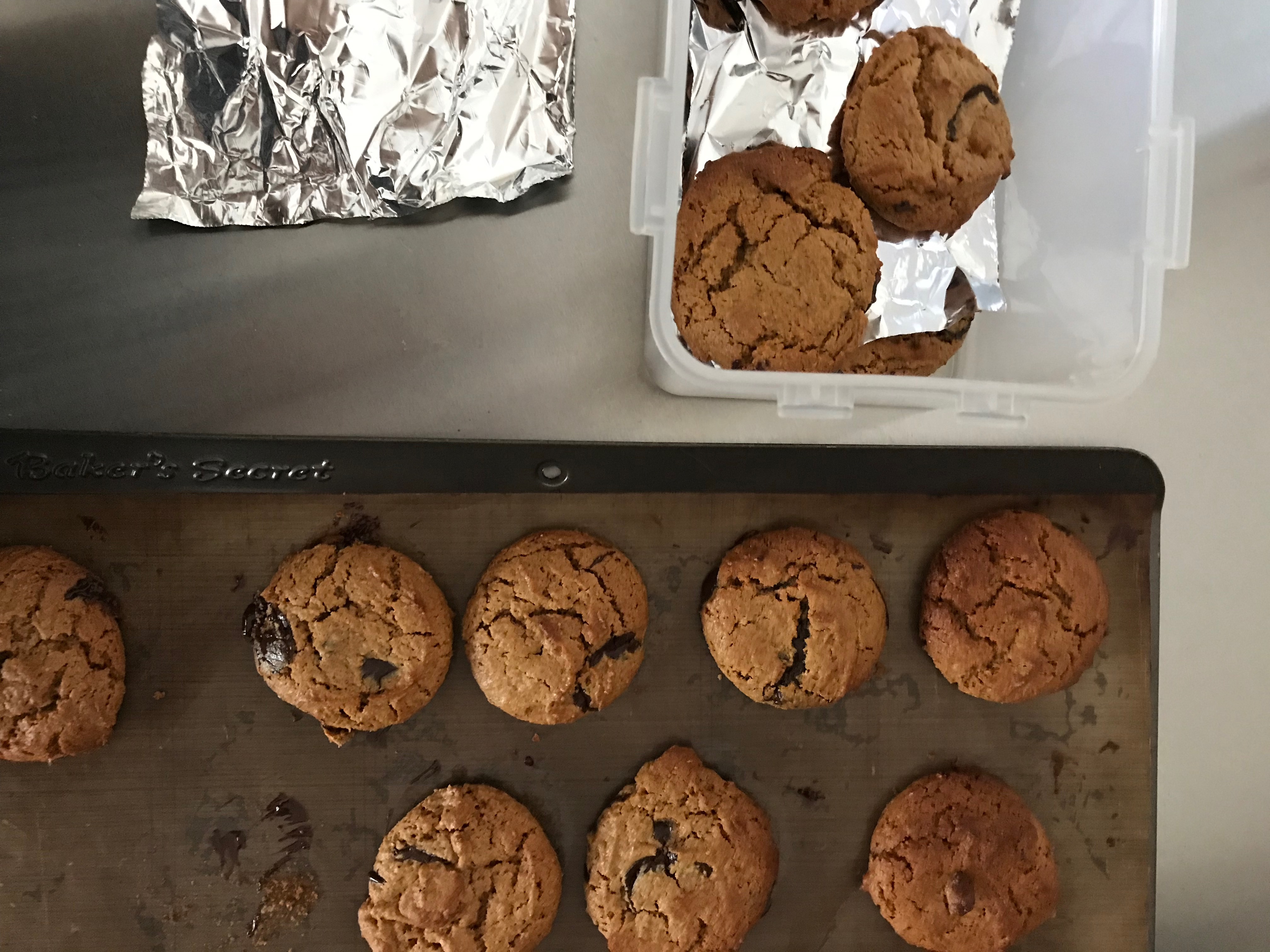 I meant to publish this recipe a few months ago, but I didn’t have the photos ready.  I still don’t have the perfect photo sequence for how to make these cookies.  But it’s the middle of the Open and these cookies were thought up between a few crossfitters so better like this than never, right?  Besides, what better timing than the middle of the CrossFit Open Games to tell you how I got started on CrossFit and baking paleo cookies.

I started CrossFit in February last year.  I had been given a tough teaching schedule at my school and they weren’t letting me push back on it.  As I despaired, I felt God say to me, “Han-Na, you’re stronger than you think you are.” Since I often experience God in physical activities, I decided to also translate that into trying out CrossFit to see how strong I was.  This was after months of pushing back on my coaches because I was very happy in the Bootcamp classes and not interested in getting stronger.

Pretty soon, it was clear to my coaches, that I had the potential to lift heavy weights.   I, on the other hand, intimidated by lifting anything vaguely heavy and the technicalities of the lifts, really did not enjoy the barbell work for the first few months.  Not long ago, one of them encouraged me, as I was going for my 1 rep front squat max, that I had the ideal physique of a squatter.  I’m not entirely sure what he means by that, do you?  Still, I managed 72kg that day, which I was delighted with. 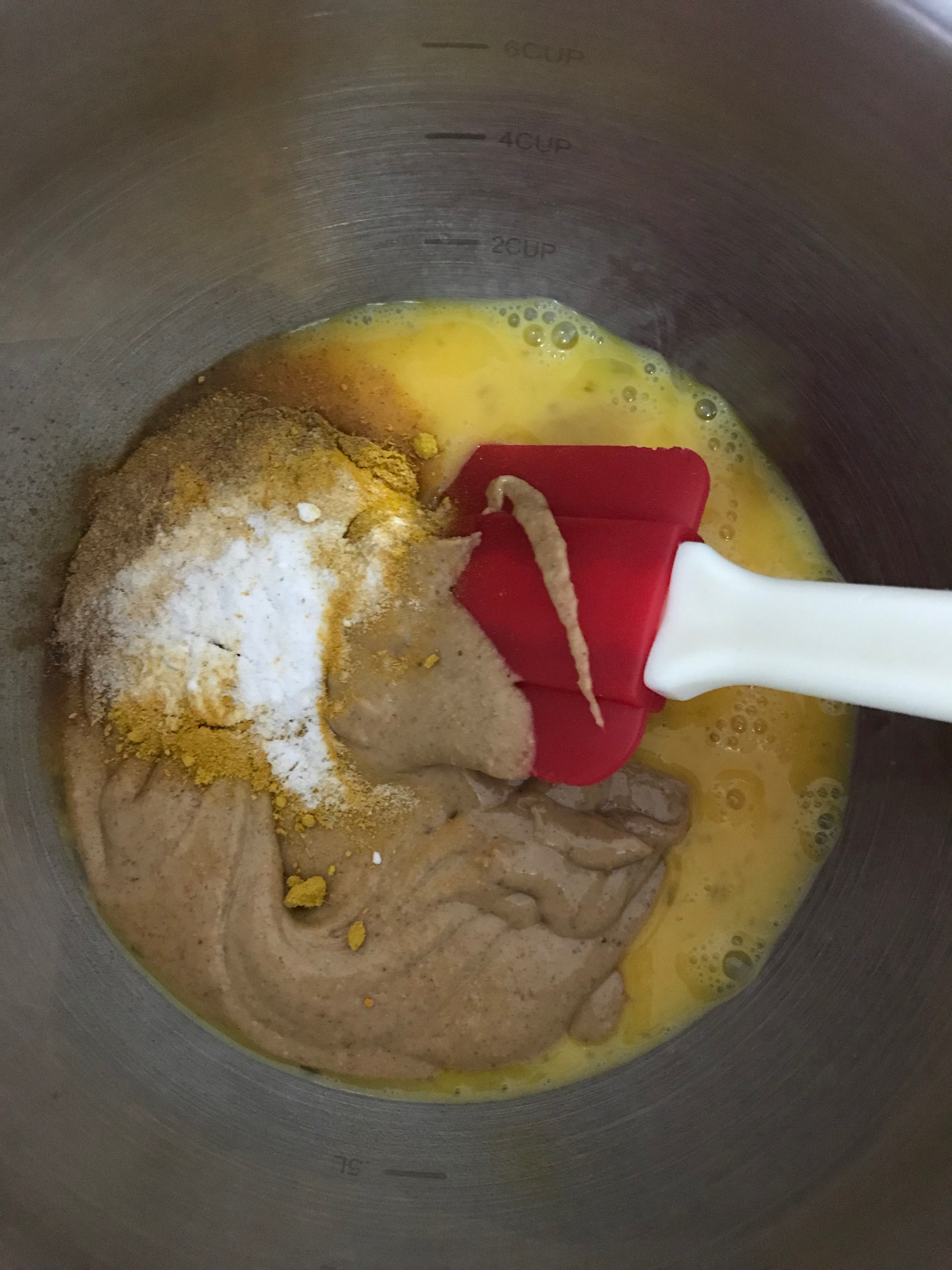 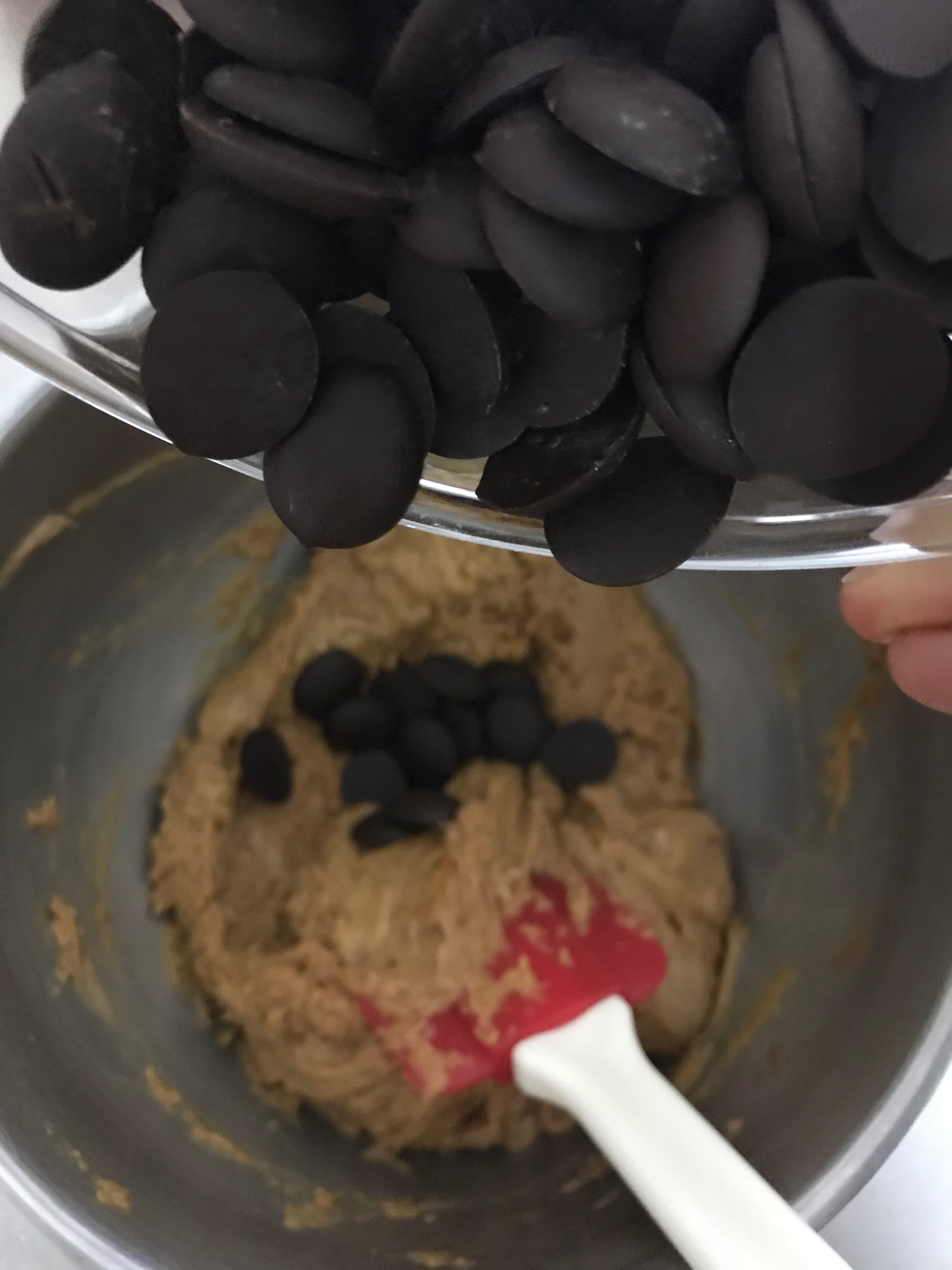 Then one day, one of my coaches asked me when I was going to bake some paleo cookies for her.  I told her that Christina (of Joyfully Nutty) and I had just been talking about how to use cashew almond nut butter in baked goods and so why not try them in a cookie.

So, thank you Minna and the CrossFit community for pushing us into trying to make these paleo cookies.

I use the Dazed and Cashewed, cashew almond nut butter from Joyfully Nutty.  You could make these with a cashew nut butter or an almond nut butter, it comes down to preference.  I went off the back of Julie Wampler’s recipe from Table for Two, and experimented with reducing and changing the sugar to make it suitably paleo.  I was also baffled as to whether palm sugar is paleo or not.  It would appear that the paleo community embrace coconut sugar but differ on palm sugar.  The little personal research that I’ve done suggests that palm sugar is produced in the same way as coconut sugar, and therefore is paleo.

Then I discovered this delightful nugget.  With the addition of different spices, I could halve the sugar or omit the sugar completely and they would still result in tasty ‘sweet’ morsels, that are soft yet chewy.  Curious, I tried a sugar free version, which admittedly, is more delicate and will thus crumble more easily, but because there’s a lot of dark chocolate, you hardly notice that the sugar is gone.

Top tip: by adding spices, you can reduce or omit the sugar.

I believe that you could make these vegan by replacing the egg with flaxseed or chia seed but I’ve yet to try it.

Baking these is a cinch (read the method below), which is another reason why I like them.  You want to satisfy that cookie craving but don’t have to wait 24 hours to rest the cookie dough.  From start to finish, you could be sitting down with a cookie (or twelve) in 30 minutes, or less. 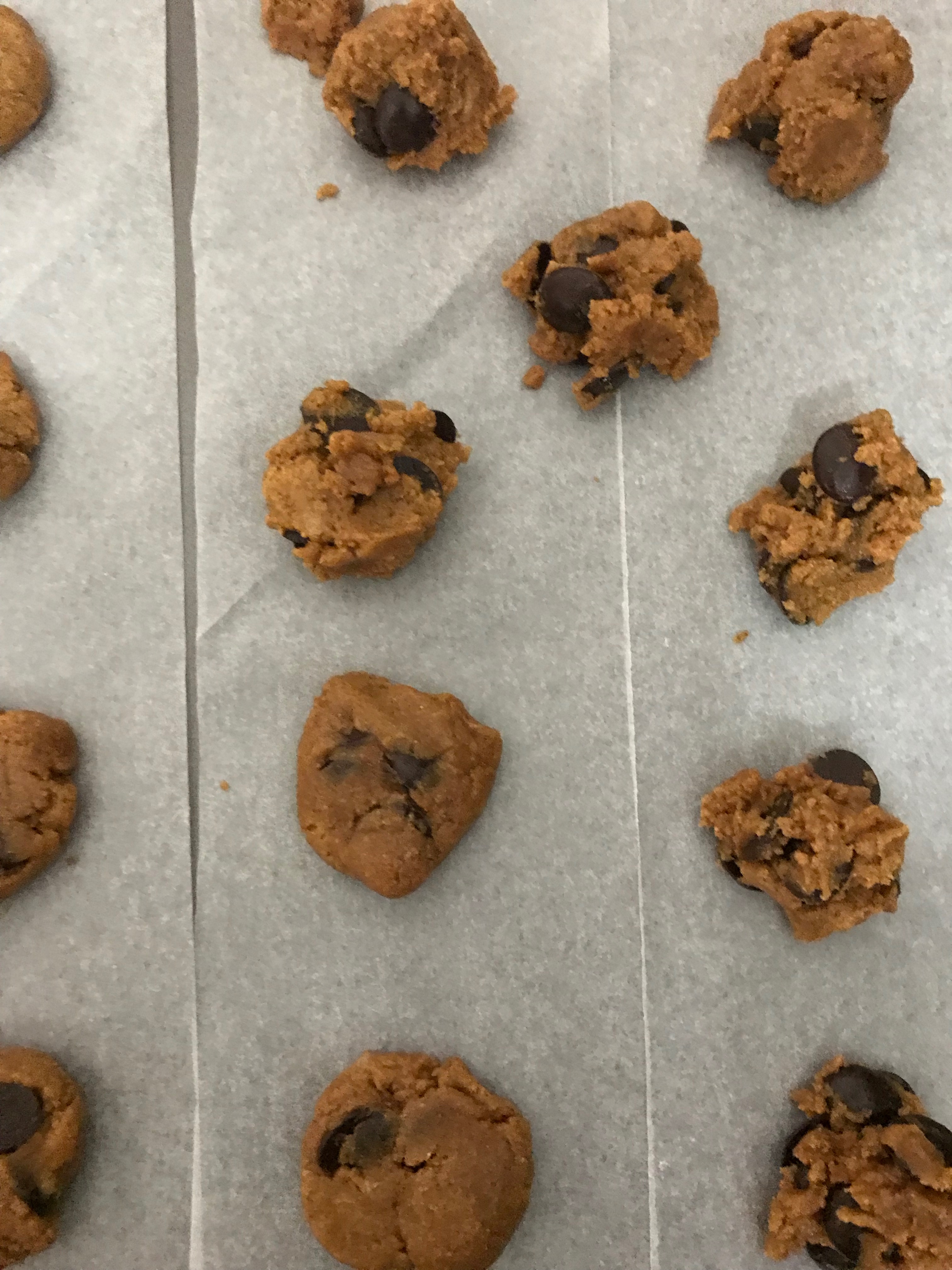 So here is the Dark Chocolate Cashew Almond Butter Cookies, adapted from Table for Two.

The verdict?  You’d never know that this was a gluten free, dairy free cookie.  Soft  in texture and rich in flavour.  I get orders for these, with sugar, without sugar, without chocolate… hehe.  So you know that they’re customisable.  I like them as a pre-workout snack.  I also like them because it’s such an easy recipe. 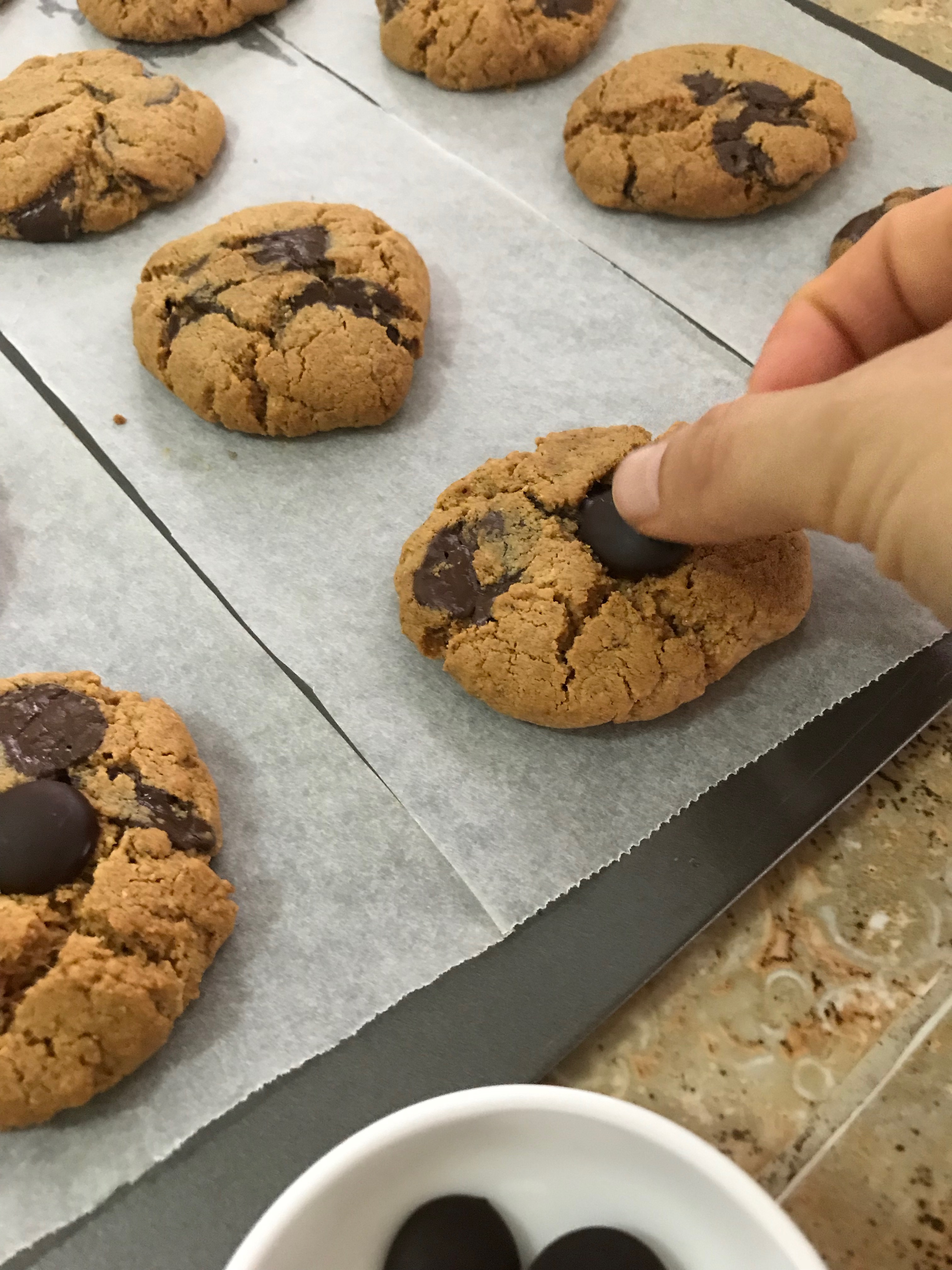