I never knew that fruit cake could be offensive.  That is, until Kiley, an American friend of mine, explained that in the U.S, there’s this tradition that people tend to ‘re-gift’ fruit cakes because they don’t like fruit cakes.  Hence those receiving the cake are kind of being told, “Here I’ve brought you a cake.  I mean, I don’t like it and someone gave it to me.  I guess you probably won’t like it too but hey, now it’s your problem.  And no, I didn’t like what you got up to at the office party.”  Hence, there’s offence in the giving and receiving of fruit cakes in the States. 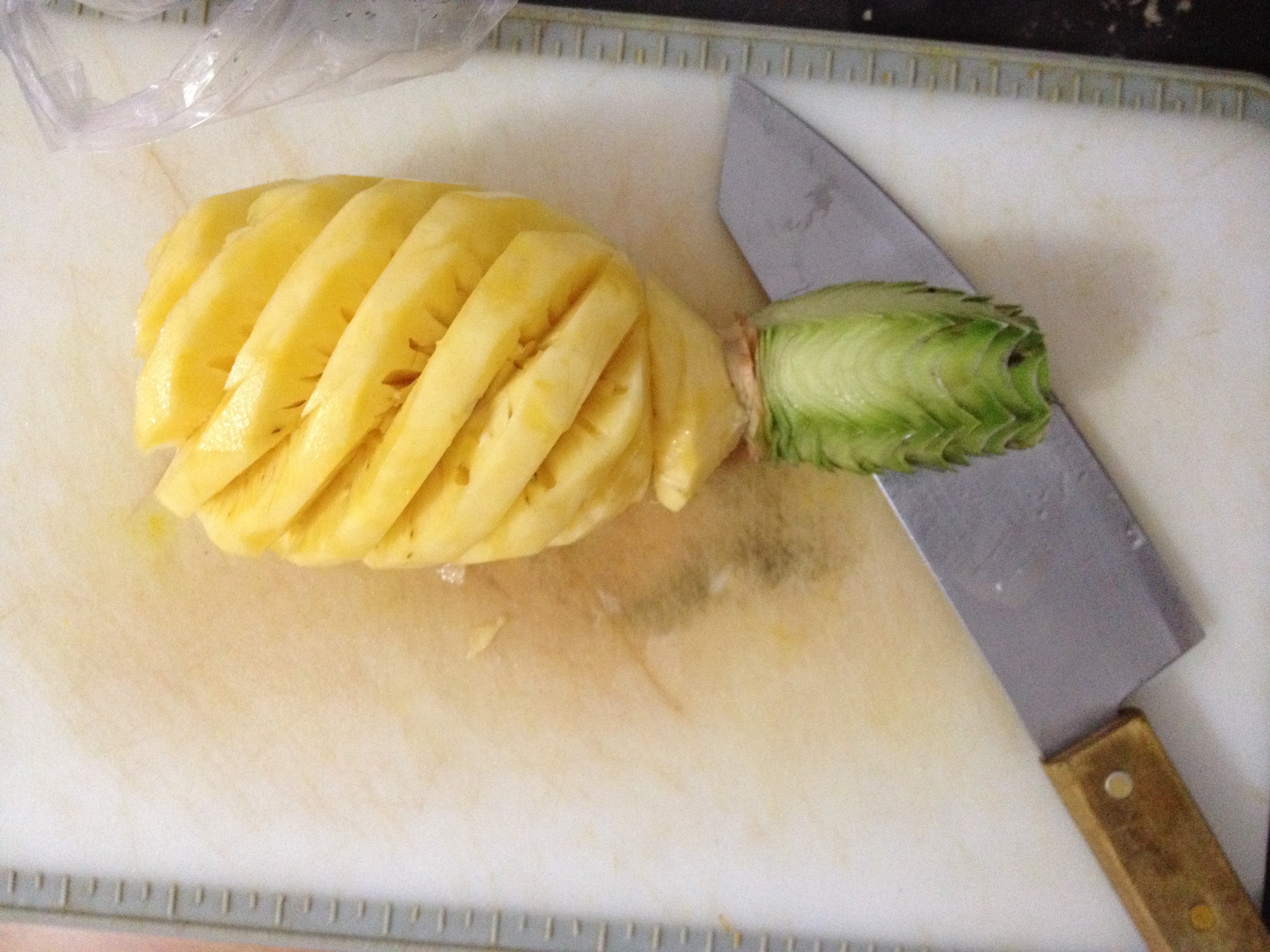 Not so in the UK.  I mean, some Brits really dislike fruit cake and would spit it out.  However, most like to eat fruit cake at any given time, from celebrating marriage with a rich boozy fruited wedding cake covered in marzipan and icing to the everyday cup of tea with a sticky slice of fruited malt loaf.  Shall I even mention Christmas cakes, Easter simnel cakes, Dundee cake..?  My mum used to make a fruited tea loaf which was delicious when toasted and buttered. 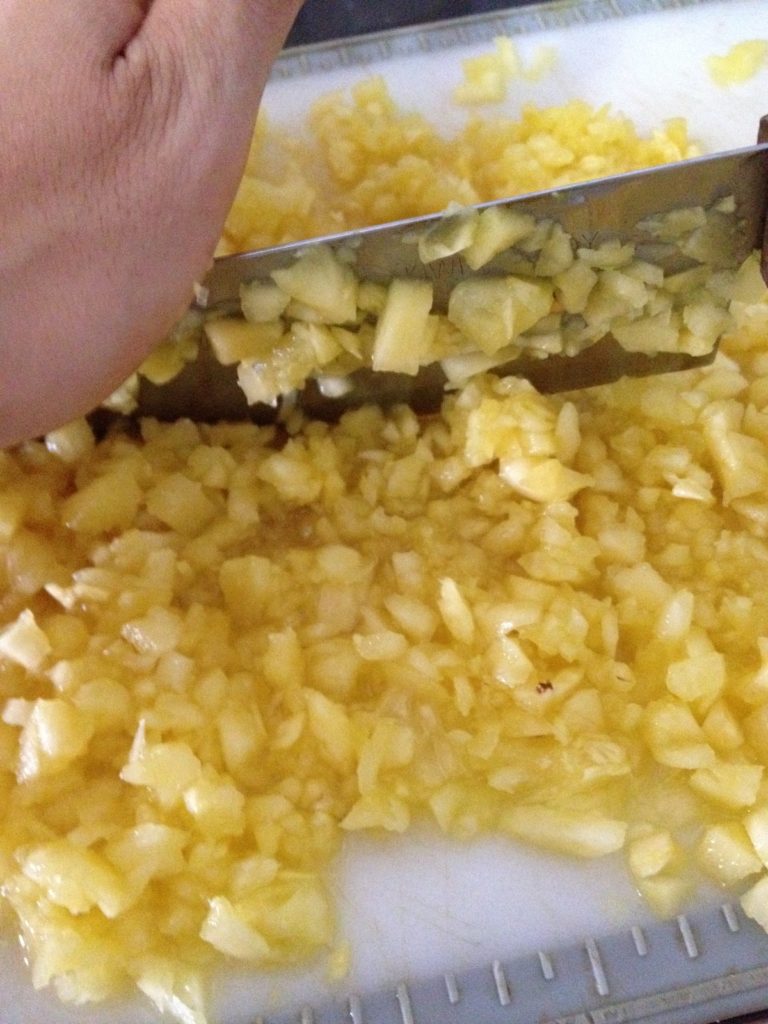 Perhaps (if I may venture a guess without causing offence) this clear cultural divide over fruit cake is because the majority of Americans have never experienced a good moist fruit cake?  I can relate!  I never really enjoyed eating fruit cake very much either growing up.  Much like how I didn’t really enjoy mince pies.  Too rich, too sweet, too dry, too much whiskey!  But I tolerated them because they were synonymous with Christmas.  I’d peel off the royal icing, give it to my brother and nibble away at the marzipan (which I loved even as a small child).  Sometimes I picked out the fruit when there was too much of it and the dried fruit was really dry and almost bitter.  Or the alcohol overwhelmed the cake.  But, from time to time, a homemade fruit cake would redeem all the bad ones for me. 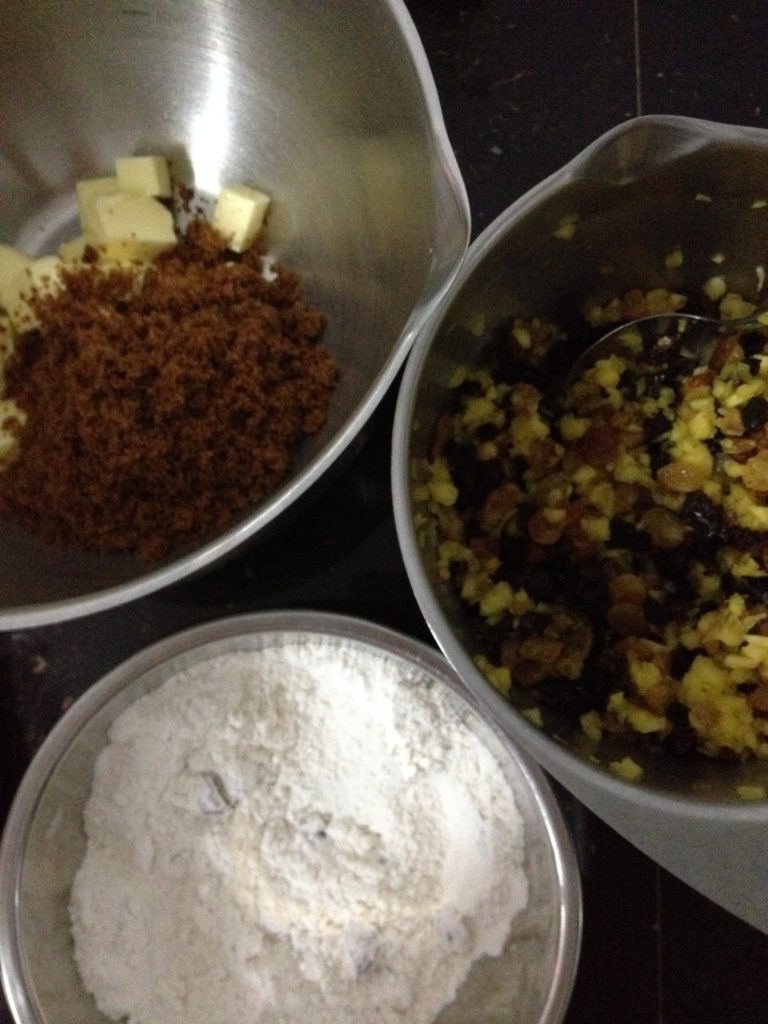 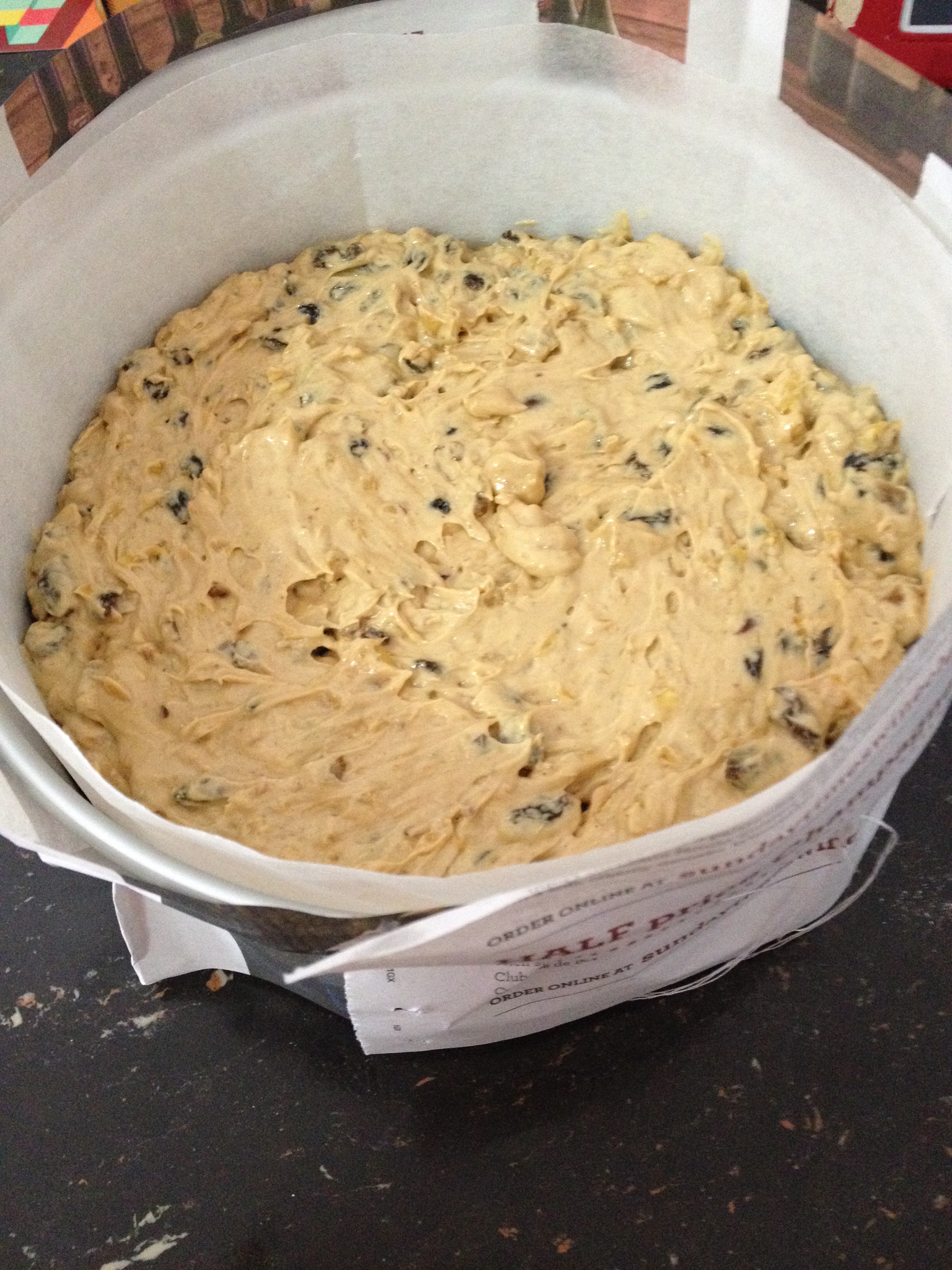 Then one day at Mrs Milne’s* house, she gave us a slice of her christmas cake.  Oh it was glorious in it’s moistness, flavour and simplicity.  Not overly sweet.  No royal icing.  No marzipan.  No alcohol in this one either.  Just. a. naked. fruit. cake.  Mrs Milne told us that it was the addition of pineapple that set this cake apart, and I believe her.  Whenever I’ve used pineapples in a cake, they often  impart moisture, rather than pineapple flavour to a cake.

Now, over a decade later, it’s still my go-to fruit cake recipe.  I used it as my marathon training cake this time.  It seemed apt to fuel up on.  I left it a couple of weeks in a sealed container in the fridge while I went on holiday to Penang and 4 weeks on, it was still moist and moreish. I baked it for Christmas for Paul, one of my colleagues, because he’d been hankering after fruit cake for as long as I’d worked with him.  3 months on, he still requests I bake him one, once a fortnight, and then complains that he can’t stop himself devouring it.  He likes royal icing but not marzipan, so that’s how I make it for him.

What I love about this recipe is the lack of planning required.  See, I just can’t be bothered with the whole affair of soaking and feeding the fruit weeks or even days in advance.  I don’t have the fridge space for it and I definitely don’t want to leave it out for the ants, cockroaches and rats now that I live in the tropics.  I can pretty much make this cake from start to finish within 2-3 hours, depending on which cake tin I use.  (more on that below).  And now that I can source almost all of the dried fruit here in Phnom Penh, there’s nothing stopping me making this cake all year round.  I still have difficulty finding mixed citrus peel and currants, but it’s so much better compared to 3 years ago.  You can buy bags of mixed dried fruit in Thai Huot but they look weird with chopped red and green cherries perhaps?  So I came up with my own measurements, based on looking at the proportions of the ingredients of a Sainsburys bag of mixed dried fruit.

Anyway, what’s stopping you.  Go on, I dare you not to like this.

If you do add brandy, or whiskey… Then do tell me what you did.  I’ve never bothered, but I might like to one day.

*Mrs Milne was my singing teacher from when I was 14-18 and one of those wonderful, life-giving, energetic, charismatic, generous Scottish women.  I don’t know where she got this recipe from, so I attribute this recipe to her.

I have used various sized cake tins to make this and of course the baking time differs. 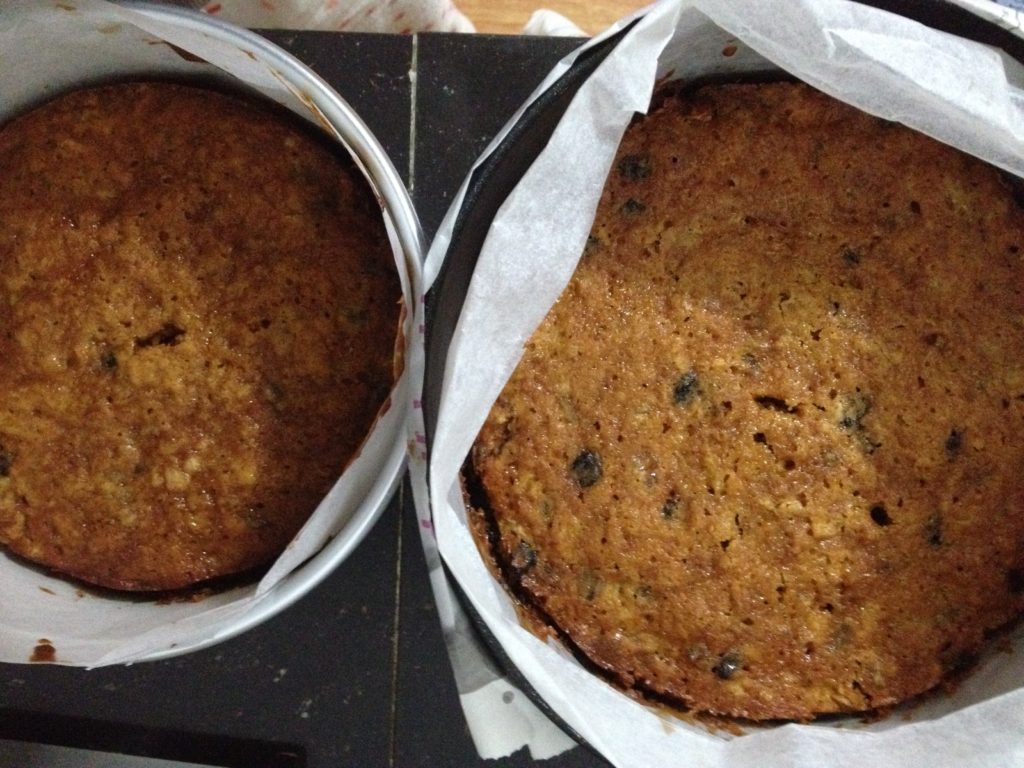 I recently found out that these apples are really tasty and cheap, compared to the other varieties of imported apples that they sell here.  So, when I woke up, I realised that the one thing that I really wanted to do today was to bake Kat’s mum’s apple cake. 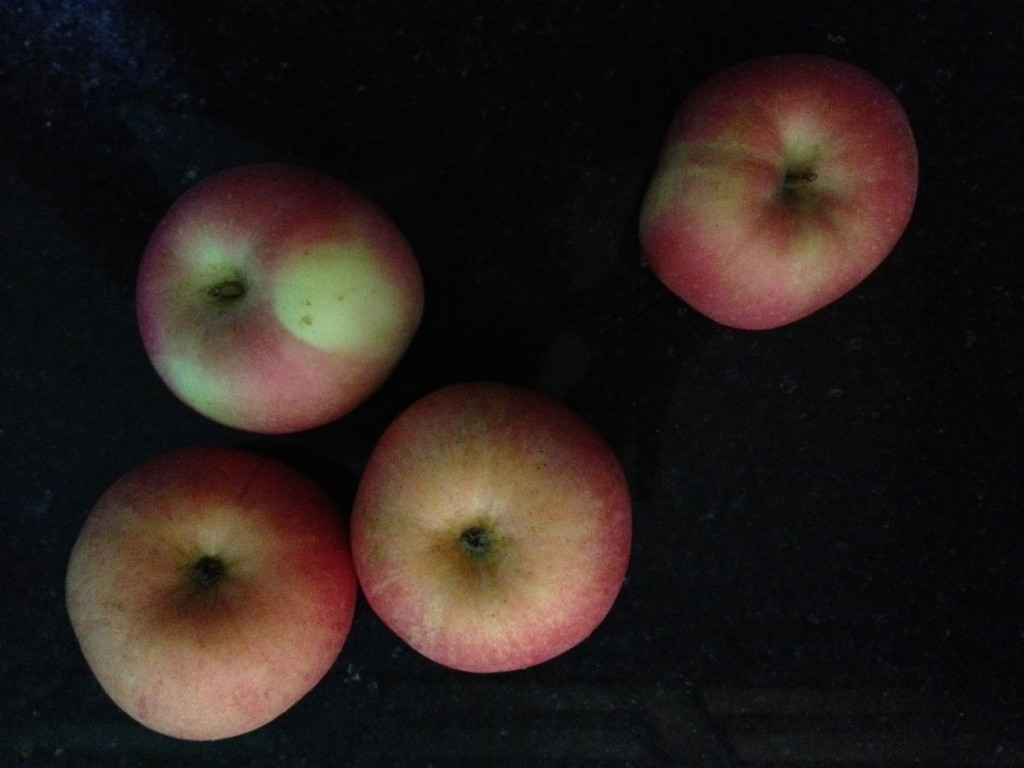 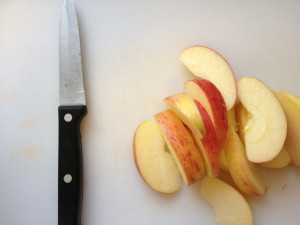 Remember how I confessed to being a baking addict?  Since moving to Cambodia, I’ve limited myself to baking once a week and I think that’s as far as my baking addiction allows me to go before I get my next fix.

That need fuelled my first ever visit to a fruit stall in the Russian market, where I bought 8 pomme for 8400 riel (the equivalent of $3.50).    I may have overpaid for my apples: I haven’t learned yet how to bargain for food in the market.  But, I didn’t mind paying a bit extra if if meant that I could bake.  However, I wasn’t quite prepared to pay $3 for 250g of palm sugar (the only raw sugar they had available), when what I really wanted was demerara sugar.  Let’s bake together at a later date, palm sugar.  I think that you’ll be delightful in a cookie.

This apple cake goes down in my baking history as the third ever cake I made on my own.  I was 21 at the time.  Kat’s mum baked this apple cake for us when Kat invited a few friends to her Devonshire home for a holiday during our final year at university. The cake tasted wholesomely delicious and I found myself asking Kat’s mum for the recipe. I was no baker in those days so what convinced me to attempt making this cake was her reassurance that the recipe was really simple.

And it was.  Once it entered into my baking repertoire, it was then pretty much the only cake that I baked for the next 2 years.

I told you that I came late into this baking thing later than most foodies. 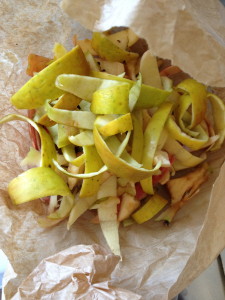 The only step that requires a bit of time is peeling, coring and chopping the apples and this time, Simon and Becci did that bit for me this time round.  Hurrah for happy helpers.  But once you’ve done that, you can pretty much throw the ingredients altogether, mix it around with your hands and pop it into the oven.  There’s no faffing with trying to make it look pretty: part of the charm of baking this cake is that is meant to look rustic.  I’ve made it before when I’ve reserved a few choice apple pieces to make it look prettier, but the detail got lost underneath the topping of sugar and ground cinnamon.  You can also use a loaf tin or a round tin, as you can see from my photos.

Since being here and discovering how expensive it is to bake with butter (the cheapest i’ve found is $3.50 for 227g) I reverted back to using margarine.  The cake tastes better, I think, if you make it with margarine rather than butter.

You can also use any apples.  I really like using cooking apples because of their tartness and size, but it doesn’t seem to matter.

Cake topping – adapt the measures according to taste.

1. Preheat the oven to 200°C/400°F/gas mark 6.  Grease and line either a 2lb loaf tin or a cake tin, that is deepish and anything between 8-10 inches.
2. Prepare the topping first for ease because your hands will be gloopy by step 5.  In a small bowl, mix together the demerara sugar and cinnamon.
3. Peel, core and chop the apples and put them into a large mixing bowl.
4. In a medium sized mixing bowl, rub together the flour, butter and sugar until they resemble crumbs.  Add this crumbly mixture to the apples. 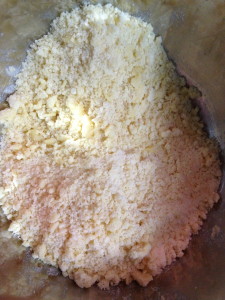 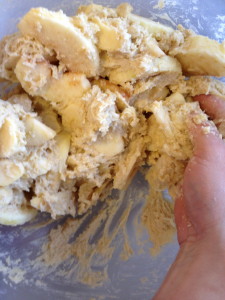 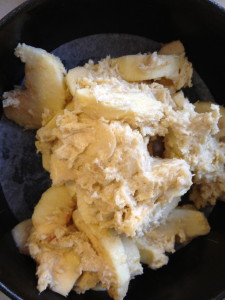 5. Add in the eggs and a splash of milk.  Mix it around with your hands so that it all combines into a gloopy mess.
6. Sprinkle the demerara sugar and cinnamon mix on top of the cake.

7. Pop into the middle of the oven and bake for about 1 hour.  Check after 40 minutes.  If the top of the cake is browning too much  then cover the top with foil.  The cake is ready when a tester comes out clean.
8. Let it cool down and rest before taking it out of the tin.

Enjoy while it’s still warm if you can.  I think that it’s worth pointing out, that with this cake you get one portion of your fruit and veg allowance, only if you eat a quarter of the cake.